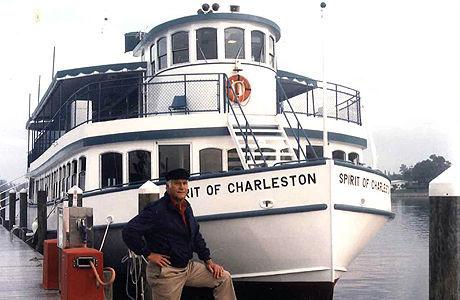 Chip Campsen remembers that at the Campsen dinner table the family did not have small talk.

“Sitting around the table with my father, we would always talk about ideas and concepts,” said George E. “Chip” Campsen III about his father, George Campsen, Jr., of the Isle of Palms, who passed away Dec. 14 at the age of 81.

“It was a constant, unrelenting educational process to be raised by him,” said Chip of the political, business and theological topics that were discussed.

“Every dinner was a brainstorm,” said Richard, his son, of the dinner that was shared with his brother, Chip, sisters Cyndi Mosteller and Terrye Seckinger and mother, Myrtle.

Cyndi said he would always talk about how you must be willing to break eggs to make omelettes.

She said that he instilled in them what leadership is all about and how to make things happen.

According to Richard, his father loved justice. “All of his friends loved him; all of his adversaries feared him; but everyone respected him,” he said, quoting what his sister, Terrye said at his funeral.

“Whether in the boxing ring or the court room, most people would characterize my father as a fierce fighter, which he was,” said son Chip, his namesake. George Campsen was captain of the boxing team at The Citadel and for most of his over-40-year career as a lawyer, he was a one-man show, according to Chip. Born and raised in Charleston, Campsen graduated from The Citadel in 1951. He went on to be an Air Force veteran of the Korean War before graduating from law school at the University of South Carolina. He served three terms as a state representative from 1958 through 1964.

“He was so tenacious, so well-prepared, and such a great communicator,” continued his son.

When Campsen died, Chip’s friend said: “the Old Lion is dead.” Chip took it as an honor that his friend was equating his father to Teddy Roosevelt, a great figure. The term refers to the cable that Archie Roosevelt sent to his brothers in Germany when their father had passed away.

Thinking of this at his father’s funeral, Chip used a reference from C.S. Lewis’s Aslan character in the The Lion, The Witch and The Wardrobe. The little girl in the story asks if Aslan is safe. The response is, “course he isn’t safe. But he is good.”

“My father was not safe for those who stepped into the boxing ring or court with him or for those who violated that moral code of conduct that was necessary for a society,” said Chip.

However, according to Chip, his father would fight for whatever he saw as just, never worrying about the monetary outcome.

After Hurricane Hugo, when no one could get back to Isle of Palms or Sullivan’s Island because the Ben Sawyer Bridge had been damaged, Campsen ferried people over on his boats for nearly a week at no charge. Later, he charged a nominal charge to cover his operating expenses.

His daughter, Cyndi, remembers that the people of the Isle of Palms made a mural of ply wood that was put up by the Ben Sawyer Bridge, saying, “thank you, Captain George.”

Chip said that his father had a real sense of making the world a better place.

“Anyone who serves a public service has a sense of what is really fulfilling in life, committing talents and efforts to transcending yourself,” said Chip.

George Campsen credited The Citadel with whatever success he had in life. Not only did The Citadel teach him discipline, but he was able to fully understand human nature more, according to Chip.

Terrye remarked, “Daddy was my hero. He was a strong-willed person. All he cared about was getting justice for the people he was caring for. He had a real sense of what is right and wrong.”

Richard agreed that his father had no tolerance for the unjust. “He would take cases for free to make sure that justice was done,” he said.

Campsen was described as “a larger than life figure,” who helped many people without wanting anything in return.

In 1961 George Campsen founded and served as President of Fort Sumter Tours, Inc. which transports visitors to Fort Sumter National Monument, where the Civil War began. He later founded SpiritLine Cruises, LLC, which operates dinner cruises, harbor tours and charter vessels in Charleston Harbor. His son, Richard, who runs the family business along with his siblings, said that his father regarded all of his employees as family. He said that there are employees who have been with the company over 30 years, a true testament to his father. His father would help out his employees, such as footing the bill to send them to captain’s school.

Campsen was married to the late Myrtle Smith “Snap Shot” Campsen for 52 years. Cindy said her father named their mother “Snap Shot” because she was as pretty as a picture.

Richard said that his father would routinely bring his mother flowers for no reason. “He would tell her everyday how beautiful she was and how much he loved her,” he said.

Cyndi said a month before their mother passed away of Alzheimers in January 2007, her father told her, “Snap, I love you so much but Jesus loves you even more and he is ready for you to go home.”

Terrye said that when their mother was at the Franke Home her father would sometimes go to visit her three times a day.

According to Chip, people would often come to his father for marriage counseling. He would gladly offer his insight free of charge. His favorite counseling device was his signature “Pebbles in the Boat” analogy. He likened marriage to a small boat that the two parties needed to constantly trim and tend to keep afloat.

“Virtually every day – and usually unknowingly – both spouses toss little pebbles in the boat. These pebbles take the form of indifference, lack of consideration, hostility, an unkind word or gesture, or any number of untold acts or omissions that strain marital bliss,” explained Chip.

George Campsen said that sometimes boulders are thrown into the boat, which are capable of sinking it immediately – such as in the case of infidelity. Of course the boulders must be dealt with swiftly or the boat will sink. However, it’s the pebbles that can be most dangerous.

“Unlike boulders, the pebbles usually accumulate in the bottom of the boat unnoticed. If this accumulation is permitted to proceed unabated, it will certainly sink the boat. The two spouses will be helpless at this point.

They won’t even be able to discern how their marriage sunk, since it was a gradual sinking by a thousand pebbles. A key to success in marriage is to realize this dynamic. Then endeavor to consciously stop throwing pebbles in the boat, while at the same time devise creative ways to bail pebbles out of the boat daily.

This is essential for your marriage to stay afloat,” said Chip, recounting his father’s advice.

His father is described as the greatest story-teller, someone who could captivate the listener while he spoke.

If George Campsen gave you his word, it was as good as gold, said Chip, who saw his father diminish his own self-interests to stay true to his word.

George Campsen was an avid hunter and fisherman who was a volunteer officer at the Department of Natural Resources. He helped manage Caper’s Island, a place where he loved to surf fish.

“He has been a great role model for the next generation,” said Cyndi of her father’s influence on the eight grandchildren.

Cyndi said, “we have the honor to be in that children’s club where ‘father’ and ‘hero’ are synonyms.”

The family held a celebration of life ceremony at Saint John’s Lutheran Church Dec. 18 with interment at Magnolia Cemetery.

(Helen Hammond can be reached at helen@moultrienews.com.)