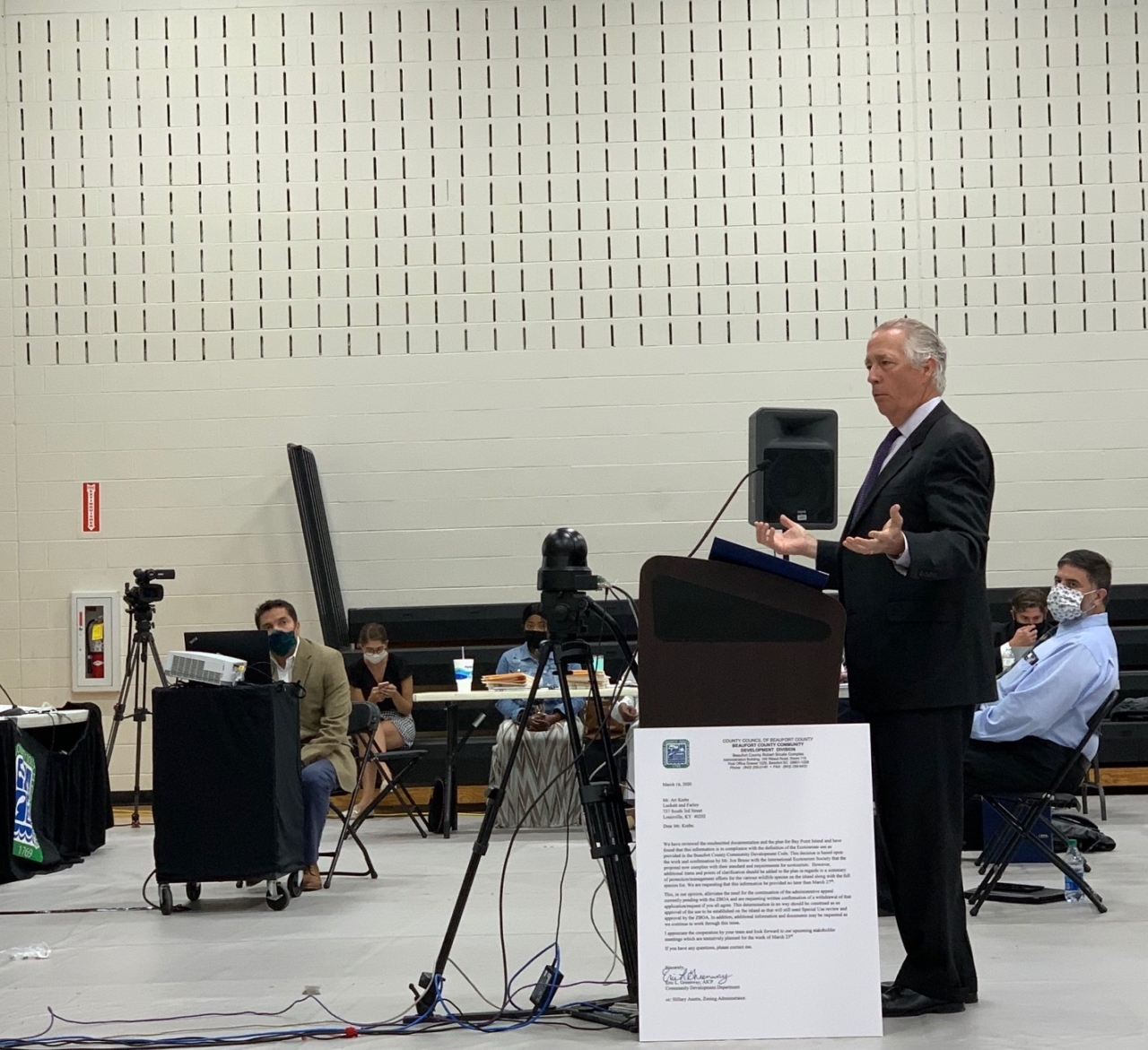 After more than a year of trying to make their case for a high-end, ecotourism resort on a barrier island in Beaufort County, developers from Bay Point Island were shut out by the county’s Zoning Board of Appeals at a public hearing on Thursday, Sept. 24.

The luxury resort, estimated to run $100 million, was to feature 50 cottages among other buildings that developers said would blend in with the tree line and have little impact on the surrounding environment.

But planning board members at Thursday night’s meeting weren’t convinced.

“This is a great idea, but I just don’t think it’s compatible with the surrounding area,” said board chairman Kevin Mack just before a vote was held to deny the project.

“I think it’s going to do more harm to the environment. It might be great for some things, but I’m just looking at the habitat on such an island, prestigious area,” he said.

About 80 mask-wearing individuals filled the gymnasium at Burton Wells Recreation Center in Beaufort for the in-person meeting, spacing themselves apart in chairs set up in rows across the gym floor.

Zoning Board meetings on the project had been postponed earlier in the summer after officials cited the need for something other than a virtual meeting on the development.

While some were there for other projects on the agenda, such as a proposed sand mine on Daufuskie Island – also denied, many more were there to voice their objections to the resort project.

In a dramatic show of opposition, Goodwine held up a box containing 30,000 signatures from residents against the development.

Goodwine, along with most, if not all, of the area’s conservation organizations have been against the project since last year when plans for the development were first revealed.

Conservation leaders cited severe erosion, rising sea levels, increased hurricanes and storms in an area with an already fragile ecosystem as reasons for denying such a development.

That opposition picked up steam in recent months after it was discovered that an organization known as The International Ecotourism Society (TIES) has a history of troubling allegations.

An article in the July 15 edition of The Island News detailed those findings, namely that TIES is no longer a nonprofit organization as it purports to be on its website, and has a history of questionable practices when it comes to disclosing financial information.

Beaufort State House Rep. Shannon Erickson who co-authored a letter with Sen. Chip Campsen was also on hand for the public hearing and read from her letter specifically addressed the “troubling” issue of TIES’ involvement with the project.

“This is troubling on several fronts not the least of which is even if the third party entity does exist, it is unelected and therefore unaccountable to citizens in Beaufort County,” she said at the meeting.

Still, developers tried side-stepping the elephant in the room and continued to make their case as private property owners.

“The owners of private property in the United States of America are entitled to develop within the standards of the zoning guidelines of any particular county of what is allowed,” said Bay Point Island LLC’s attorney Tom Taylor.

As a compromise, developers offered to place 1,200 acres, including 15 buildable lots already permitted by the county, into a conservation easement. That would leave 25 lots for future development plus the resort.

Ultimately, however, the project was denied in a unanimous vote.

Mindy Lucas is the Beaufort reporter for The Island News and is a staff writer for Lowcountry Weekly. She can be reached at mindy.islandnews@gmail.com.